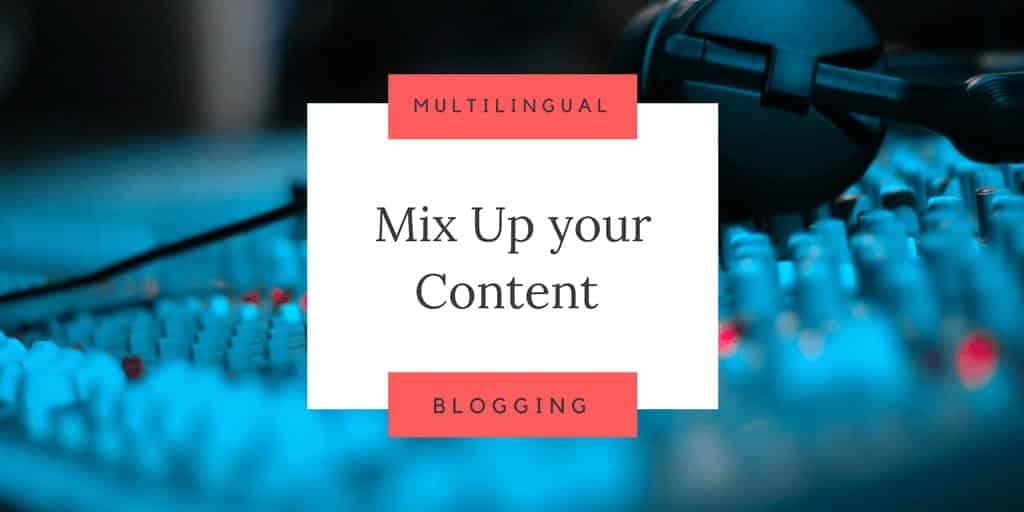 When you want to create a multilingual blog, we have normally two solutions. First is to have separated folders on our site, second it to create differences blogs, one for each languages.
We will discover in this post that a third solution exists, mix up your blog. If at the first seen it can looks strange, the WordCamp’s video of Stephanie Booth completely change my mind on it.

In this post, I’ll present to you the video, do a transcription of this presentation, and introduce some personal thoughts.

What we’ll see in this post is not specially for WordPress users, and can be done on every types of blogging / websites, even we will see a WordPress’ plugin develops to helps you in this tasks.

WTF is going on Insidedaweb.com ?

For the reason why this blog post is in English, well I hope that in this post you’ll found the reason by yourself. Personally, even if I think I’m not perfectly bilingual, I speak English all the day with my team, read English all the day cause WordPress resources are mainly in English. But open a new site, or translate everything I post on Insidedaweb.com was out of question. I don’t have time for it, and not enough energy. Stéphanie’s video was like a revelation for me, and how to proceed.

And no, Insidedaweb.com won’t switch totally in English. First reason is that at the beginning, this website was opened to translate English WordPress resources to none english readers, from the French « world ». If in 2009 lakes of French contents about WordPress was obvious, today it tents to be less and less true. Second, my natural language is French, and for some content, writing in French is easiest for me, as for some content it’s easiest to write in English. So sometimes my posts will be in English, sometime it will be in French. If you don’t read English (or French) stay tuned to the next post, it will be certainly in a language you can read.

Before really starting to speak about how to work in a multilingual blogging system such as WordPress. I want to thanks FX Benard. Few days ago, I have integrated one of his projects, calls WP-Translations.org. The goals of this project is to provide translated content of free plugins and themes. In a forum’s thread, FX shared with us the video we’ll see in details in this post. Thanks FX, with this simple shares, you change my vision of how to blog. This is the true power of the Free and Open Source community.

By the way, if you have some ease on another language than English, and wanted to help the WordPress community by providing some translation, WP-Translations.org will welcomes you with open arms.

In this video, you’ll see how Stéphanie speaks about the way to use multilingual in your blog. her goals was to convince us that mixing languages on a page is not dirty. Well Stéphanie, you have perfectly convince me !

We Don’t Live in a Monolingual Silos !

The first parts of the Stéphanie presentation is focus on made us understand that we are leaving in a monolingual silos. Take WordPress, it’s available on English, French, German, Serbian and whatever language you can imagine. But the problem is that each of those languages are available at one language at a time. We provide it like this, cause we tent to believe that people are monolingual. But in fact, that false, bilingual and multilingual peoples are in majority. To support this assertion, Stéphanie quotes François Grosjean that saids :

Whenever I give a talk on bilingualism, I surprise my audience with the following estimate: more than half of the world’s population uses two or more languages (or dialects) in everyday life. Bilingualism is present on all continents, in all classes of society, in all age groups.

We know, for example, that in Asia and Africa, many people are bi- or multilingual although precise figures are often lacking. In Europe, a bit more than half of the population is at least bilingual. Smaller countries such as Luxembourg, Switzerland, and The Netherlands house many bilinguals whereas larger countries such as Great Britain and France have fewer of them.

Full article can be found here.

Even if this sentence is certainly true, what I can’t verify by myself, I have to admit that for many peoples, speaking a dialect is not really what we thought when we speak about being multilingual. But in fact, if we consider that be a multilingual people is just being able to speak two languages, yes, this is true. In majority, people aren’t purely monolingual.

By my own experience, I have to said that I’m in touch with a lot of people that aren’t purely monolingual. My wife have Serbian origins, speaks and write perfectly Serbian, French and English. If I take my daughter, it’s the same for Serbian, French, English, and even German. And for me, well, I don’t speak yet Serbian 🙂

So why continue to leave our digital life as if people were able to speak just one language at a time ?

Is French People Different from the Rest of the World ?

During her presentation, we discover that Stéphanie is born and grown up in Switzerland. That’s not so much a surprised when we know that this video is taken from the Switzerland WordCamp. What I know from this country, is that for a small country, a lot of different languages are used. To be precise (if I don’t do a mistake), 4 languages are used. So it’s not so much surprising that for her, multilingualism is natural.

But what about a country such as France ? In France, we speak only one language, French. Well, some people will kills me to saying that, cause it’s not really true 🙂 We have 22 different dialects (or even pure language, if we takes language as Kanak or Tahitian). And even more if we takes immigrant languages. But I think we can’t compare this to the Switzerland case, cause most of the dialects used in France are available only on small area of France, compare to German or Italian that are speak by millions of people around the world.

But my purpose here is more about how we lean foreign languages in France, and how we use it. I don’t know how it is on other countries, but languages learning in France is very scholar. I remember perfectly the fact that after more than 10 years of English learning, I wasn’t able to speak English. Oh yes, for sure I have some vocabulary, grammar basis, but we never use it at school. We learn it. I wasn’t able to understand a movie in English, and worst, I wasn’t able to speak with another one in English. Why I’m speaking about my private life here ? Just because I’ve the sensation, during many years, that I was a purely monolingual person. And due to this, I was thinking that it was the case for most of the French people. That’s sure completely false. Even my grandfather was speaking at least two languages, second was a very small dialect of the center of the France. But I never saw this as to be a multilingual person. And I was wrong.

About how we learn foreign language, I hope, and I guess, that this situation have changed. And even if it doesn’t really change, no, French people aren’t different of the rest of the world. Maybe some are too shy to use it, but sure most of us are not purely monolingual person.

Stéphanie saids one thing I’m very agree with her. Today, linguistics borders are much more a problem than political borders when we speak about digital life. Creating different Internet such as Francophonia Internet and Anglophonia Internet. Person able to create multilingual bridge are important to connect those Internets. And in fact, those peoples are very common as the biggest parts of the world population speaking at least two languages.

For Stéphanie, 3 different strategies exist to create bridges strategies. Here are the firs two, and the problem they triggered :

The third solution is obviously the good one, the magical one 😉

Mix up every languages in your blog

Here again, the first point Stéphanie speaks about mades me laugh, cause it was exactly the same kind of reaction I have.

Are you crazy, do you want to kill my SEO ?

Stéphanie saids a very interesting thing. Google will cares about and honestly, who cares if it’s not perfectly optimized ? Well, on this particular point, I have to said I’m not 100% ok with it. Most of the time, SEO tricks I’ve been reading said it was one of the baddest thing to do, it will confuse search engines. It’s why plugins such as WPML create separated folders for specifics languages. But here, using such as plugin won’t be the solution as we have decided to mix up our languages. So what to do ?

As it’s completely new for me, and I don’t found very good topics on how to optimized SEO for mix up language site, here are few tracks I think we need to use :

As I said, it’s the first time we post in English on this blog (but certainly not the last). So we don’t have enough experience to know exactly the pros and the cons. We will do point on it in some month to know how much it have affect our SEO, and if it was in the good way or in the bad way. Stay tuned.

Second point raised by Stéphanie is about monolingual people who reads your blog. In order to demonstrate that it’s a false issue, she asks to the people on the room how many speak only one language. The result was… no one. And for sure, she is speaking in English, on a country that English is not an official language. So how can it be different ? But what is certain, is that yes, monolingual people exists, but blogging some times in another language is not insult our readers.

And other point, if someone is really interesting by your article, he will try to understand it, read it, or try to translate it with such automatic translation tools as Google Translate for example. Sure it won’t be perfect, but at least he will get the point of what you are explaining. In order to help peoples that don’t speak the language in which you are posting on, here is come the really utility of Basic Bilingual. It will let you permit to create an excerpt of the text, in another language (for example a French excerpt on English post) to let know to your other readers what this article is about.

Want to see a blog that is used to mix up language from a while ? Just check the climptothestars‘ stéphanie blog.

I’m go to leave you with one song, that I think it’s the perfect example of how mix up language can create huge success.